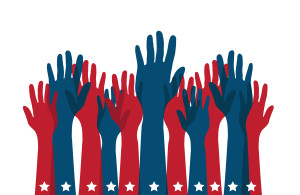 Yesterday was Super Tuesday! But what was so “super” about it? Well, the largest number of states held their primaries or caucuses to elect their nominee for president.  It’s an important day because the results are usually a strong indicator of who will win the presidential nomination for the Democratic and Republican parties.

How do you think the results affect Latinos? Here is a recap of how some people are reacting to Super Tuesday:

“My primary concern if someone like trump wins is that a lot of undocumented families will be separated…if I lose my mom It would be like if I lost my world.” – Latino resident from Virginia

“Latinos, like all voters, want a president who will seek workable solutions, and not someone who only has fiery speeches to stoke anger and media coverage. As the primaries and caucuses continue and the choices become clearer, Latinos will vote and be counted on the side of our communities and the best values of our nation.” Ben Monterroso, Mi Familia Vota

“With hate-spewing Donald Trump closer than ever to the Republican nomination for President, it’s time to get real about a Basta Trump campaign,” writes Democracy Now! co-host Juan González in his new Daily News column.

“Exit polls in the state [of Virginia] indicate that the Republican Party’s embrace of an anti-immigrant platform may not only doom them with the growing Latino electorate, but could also erode their base. –Alice Ollstein, ThinkProgress

“I believe that the only way to win the White House is with the Latino vote.” – Jorge Ramos

A lot is happening and a lot is at stake. Make sure then when it’s your turn to participate, you go out and vote!  Stay tuned on the latest y corre la voz! ¡Comparte con tus familiares y amigos! ¡Somos el futuro! Let’s be present.